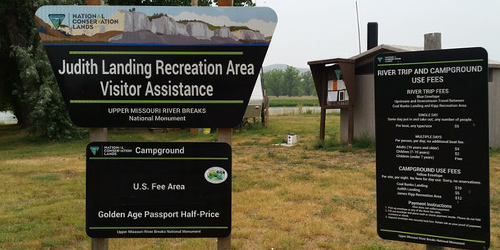 Just east of the White Cliffs area in the Missouri River Breaks, the Judith Landing is a recreational area, campground and popular take out point for canoers, rafters and kayakers exploring the Upper Missouri National Wild and Scenic River Corridor. Located 44 miles south of Big Sandy on Highway 236, with 17 miles of highway and the rest improved gravel or 23 miles north of Winifred on the PN Road which is all improved gravel, this is a must see on your Central Montana travels.

The Judith Landing area was placed on the National Register of Historic Places in 1975 due to the numerous historical events that took place at the confluence of the Missouri and Judith Rivers.

May 28, 1805 – Campsite for the Corps of Discovery. As the explorers slept, a frightened bull buffalo charged through camp.  Lewis and Clark and the others narrowly escaped being trampled thanks to the alerting barks from Lewis’s dog.

1844-1845 – The location of Fort Chardon Trading Post, the 3rd Fur Trading Post established by the American Fur Company along the Upper Missouri River.

1869 - The south side river bottom was home to the PN Ranch, once the largest cattle ranch in Montana at 50,000 acres.

The campground at the Judith Landing is open May 15 through October 15 and includes 8 campsites with picnic tables, fire rings and cottonwood shade.  The camping charge is $5 per night.  In addition to the boat launch and campground, there is a BLM contact station, garbage dumpsters, outhouses, shuttle vehicle parking area, fishing access and a small, privately-owned country store, open on a seasonal basis.

Some of the listing features are available only for registered users. Please login to view all listing details!