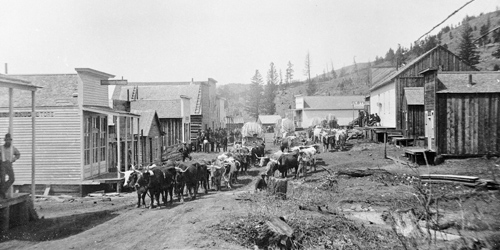 Gold and Silver Ghost Town of the Judith Mountains
By Jerry Hanley, 2017

Gold was discovered in the Judith Mountains near the head of Warm Spring Creek Canyon in 1879. Other discoveries followed and in 1881 the first buildings were constructed amid a tent camp. In 1881 the camp was named Maiden, also referred to as Maidenville. Nearby camps of Andersonville, Rustle, and Alpine also developed but soon gave way to Maiden. Fort Maginnis, east of Maiden, added to the town’s prosperity and also, its frustrations.

It was soon recognized that real mining potential would come from gold and silver lode deposits (hardrock veins) rather than the originally discovered placer gold (gold found in creek gravels). Developing underground hardrock mines required substantially more investment than simply digging and panning gold out of creek gravels. The richest mines, the Maginnis, Spotted Horse, Kentucky Favorite, and Cumberland, located on Gold Hill just east of Maiden, endured problems and intermittent operations yet produced millions in bullion to the owners. Hundreds of men were employed.

Maiden flourished with activity. Nearly everything arrived by freight wagons and stage coaches. By 1883 Maiden boasted 154 buildings and was still growing. Frustratingly, no one owned the ground they built on because the site had already been designated as mining claims. A few stone buildings were built, the Belanger Department Store was the most elaborate. The population, of around 1,200 including outlying areas, peaked in the late 1880s and then began declining.

By 1900, the population had dwindled to a few hundred residents. In 1905 a fire destroyed most of the business district and only a few businesses were rebuilt. The last saloon closed around 1918, the post office in 1921, and the school a few years later. In 1927 a fire destroyed the last hotel/boarding house and the assay office.

The Spotted Horse mine reopened in the early 1970s and operated intermittently until closing in 1989. The most recent gold production came from the Maginnis mine in 2016. The mines of Gold Hill have produced approximately 400,000 ounces of gold and a like amount of silver. The remains of nearly 20 structures dot the Maiden townsite and vary from total ruins to remodeled buildings serving as dwellings.

A saloon/assay office, and the Maginnis’ 1884 ten stamp mill remains have been privately preserved. Several newer homes are also within the townsite. A few signs are located around the site. Montana and Main Street can be driven or walked and offer a good look at Maiden. All structures, ruins and other travel ways are on private property.

Some of the listing features are available only for registered users. Please login to view all listing details!